Reconversion: From Coal to Yachts 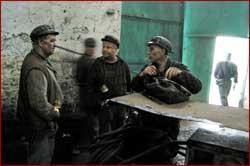 The rebirth of the Jiu Valley is slow if we take into consideration that the National Pit Coal Company has a lot of debts to cover and the "social-economical regeneration" program, financed by the World Bank, has just started.

The colliers in the Jiu Valley are having hard times trying to change their occupations, even though they benefit from a financial help from the World Bank. The 13 companies that benefit from the support of the Business Center in Lonea, built with money from the World Bank, have attracted 73 colliers out of the thousands of unemployed people in this region. Their professional reconversion pushed them towards fields that donât have anything to do with the underground. One of the companies that have employed former colliers produces substructure parts for yachts, and another one produces electrical devices that are supposed to go to Great Britain. However, these are rather picturesque aspects. THE INCUBATOR. The number of unemployed colliers would demand the initiation of a newer center in the region. Marcel Hoara, the General Director of the National Agency for the Development of the Mining Region (GDNADMR), which manages 60 million US dollars from the World Bank, says such a decision will only be made after a thorough study of the situation. The Center at Lonea has also been built with money from the World Bank. Besides polyester and glass fiber for yachts, the companies here also produce metallic garments, furniture and also perform commerce, cleaning and patisserie services. The center is some sort of a hybrid between a business incubator and an industrial minipark, which offers access to utilities, office and production spaces for rent at small prices, as well as management services. SLIGHT PROGRESSES. The absorption of the World Bank Funds is still very slow in the Jiu Valley, because, for example, in the case of the mini-loans for companies, the money have been redirected towards the Alba County and other localities in the Hunedoara county. With the previous pilot-project, the total value of the mini-loans reaches 800,000 US Dollars, loans with smaller administrative costs. Even though more substantial, the success of the financing of the new employeesâ salaries is still small: since the beginning of last year, 1,278 new jobs have been created, which will result in 1.53 million US dollars going back to the companies. The condition is that the companies have to keep the job of the former colliers for at least one year. Of the 60 million US dollars from the World Bank, only 9 millions have been spent. THE ABYSS. From 1990 untill present, more than 38,000 colliers have been dismissed in the Jiu Valley. Even though he admits the GDNADMR programs are not used as much as it should, Marcel Hoara is optimistic. "The numerous preceding phases have taken a lot of time, it took until last year". On the other hand, the local advisers have noticed the small entrepreneurial interest in the region. "Most men leave to look for work somewhere else, especially abroad. They graduate from the bricklayer and cook courses at Lonea and leave the region. Most of the ones that came into the Valley from other regions went back with the compensatory salaries and built houses for themselves. Some have also bought apartments in Bucharest and rented them", an adviser at the Lonea Center says. SURVIVAL. "For at least 5 or 6 years, the survival of the Jiu Valley will be strongly related to mining", Varujan Vosganian (photo), the Minister of Economy, who didnât seem so pleased with the things he had seen in the Lupeni mine, stated. The survival will cost us 1.2 billion lei until 2010 only. After that, there wonât be any other subsidies. The National Pit Coal Company (NPCC) has debts which are twice as great as the 700 billion RON turnover, and its chances are strongly related to a possible fusion with the thermal stations in Paroseni or Mintia Deva, which are owned now by Termoelectrica. No money has been invested in the NPCC between 1990 and 2003, when a million US dollars have been spent for the loan. Recently, 8 million euros have been spent on a complex abatis and 30 more will be spent for the same thing. The coal extraction conditions are still precarious. The miners still work with gads, and the coal is continuously threatening them from the protection nets above. The inefficiency of the transporters through the galleries is compensated by the shovels. Compared to 1990, the population in the Jiu Valley is twice as small, reaching approximately 15,000 people. The colliersâ life expectancy reaches 55 years, but there isnât any professional study of the health status in the region, according to the data from the Ministry of Economy.
Translated by SORIN BALAN
×
Subiecte în articol: that with have english from world been bank valley world bank jiu valley