Why is terrorism still spreading? 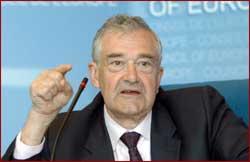 There are two major mistakes which a society can commit in the face of the terrorist threat.
The first one is to try to justify it. The second is to underestimate it. Terrorists are ruthless and insane but they are not stupid.

Terrorism is a complex phenomenon, and to fight it we need a comprehensive approach.
Condemnation and suppression are essential but not enough for a long-term solution. We must work to prevent the conditions which help terrorists to enlist new recruits for their criminal cause. The fact is that the most serious attacks perpetrated on European soil were carried out by people living, working and raising their families in Europe. Only an infinitely small minority of people will make the leap from extremist ideologies to unjustifiable acts of terrorism, but the problem exists and while seeking to intercept and prosecute terrorist networks, governments must also identify the underlying malaise within their communities in order to tackle the issue. Regrettably, terrorists always seem to be one step ahead and they can easily adjust to suppressive methods. It is crucial to fight against the recruitment, financing and incitement to terrorism through a legal framework and an international co-operation but it is equally important to deal with the conditions conducive to the spread of terrorism. Some obvious conditions which make possible the spread of terrorism are conflicts, poverty and under-development, violations of basic human rights and no rule of law. It is dangerous to try to deal with these issues with short-term, simplistic solutions, demagogy and repression. It is equally dangerous to designate any individual ethnic or religious group as terrorist. This is really something that terrorists want. In Europe, we reject the false choice between freedom and security. This is not some idealistic delusion, but the result of a long and tragic experience with terrorism on European soil.
Human rights are key in eradicating these factors. Together with the observance of the rule of law, they are a powerful tool against terrorism. They are an asset and not an obstacle in the fight against terrorism. Paradoxically, in today's more than ever inter-connected world, there is a growingly visible division between communities. To build or repair bridges over increasingly "troubled waters", and to promote common interests and mutual respect, we must engage in an inter-religious and inter-cultural dialogue. Education and dialogue can help to change the conditions which risk to turn young people into agents of destruction. The Council of Europe has been protecting and extending human rights, the rule of law and pluralist democracy since 1949. We are determined to combat terrorism because it represents a threat to these fundamental values. We have developed a three-pronged approach composed of legal action against terrorism; safeguarding fundamental values; and addressing the root causes of terrorism. The Council of Europe Convention on the Prevention of Terrorism will enter into force in June 2007 and further contribute to these objectives by increasing international co-operation and enabling a more effective response. The convention sets out two ways to achieve this objective: first, by establishing as criminal offences certain acts that may lead to the commission of terrorist offences, namely: public provocation, recruitment and training; second, by reinforcing co-operation on prevention both internally through national prevention policies, and internationally through the modification of existing extradition and mutual assistance arrangements and additional means. Moreover, it requires the Parties to promote tolerance by encouraging inter-religious and cross-cultural dialogue involving, where appropriate, non-governmental organisations and other elements of civil society in the fields of education, culture, media and public awareness raising. This requirement, which is fully in line with the United Nations Global Counter-Terrorism Strategy Plan of Action of September 2006, aims at preventing tensions that might contribute to the commission of terrorist offences. We must continue to develop measures to thwart the existence of conditions conducive to the spread of terrorism. We must make every effort to bring communities closer together and get people to embrace diverse, multicultural societies, which are an essential and invaluable achievement of civilisation. The most efficient way of tackling terrorism is by eliminating the conditions which may lead some people to resort to terrorism. The international community must endeavour to provide an environment in which individuals feel they can fight for their rights through their rights. Terrorists are afraid of justice because not only because it stops them from killing people but because it deals a deadly blow to their cause. Indeed, some have labelled the fight against terrorism as the ideological conflict of the 21st Century, but an ideological conflict cannot be won by force alone. If we want to defeat terrorists, we must remain faithful to our ideas and values. People around the world must know that we are right,and that terrorists are wrong, that we are just, and that they are criminals.
×
Subiecte în articol: that which english terrorism must people terrorists