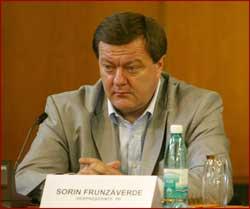 The public bidding for buying seven medium- and short-courier transport planes to service the Romanian Air Force was annulled after scandal broke regarding the integrity of the process.

The main criterion for selecting the winning company was advertised to be the price. EADS CASA, in Spain, entered the competition with its C-295 plane, and Alenia Aeronautica, of Italy, entered its C27J Spartan. The bidding book, outlining the technical requirements for the deal was carefully altered to favor the Italiansâ offer. However, on opening the envelopes, the selection committee panicked when seeing that the EADS offer made the main criterion, as it was 12 million cheaper than the one of Alenia. Playing the technical requirements against EADS, the selection committee disqualified the company from the bidding process, which triggered a huge scandal. It did not help that the media found out of the problems the Spartan plane posed to its buyers in Greece, where the planes where proven to actually leak water inside. Alenia mounted a media campaign in Romania, to counter the information revealed by Jurnalul national, while EADS Spain contested the result of the bidding. The National Authority in Charge with Solving Complaints did not manage to make the first term for solving the case and was subjected to a lot of pressure. Later on it invalidated the deal, but not in very clear terms. Catalin Popescu, spokesperson for the authority, said the bidding was annulled because "it infringed upon the principles of non-discrimination, fair treatment and transparency in public acquisitions." The Air Force commander Gheorghe Catrina refused to undersign the results of the bidding, while the Defense minister Sorin Frunzaverde showed he favored the Italians, after Silviu Berlusconi supported the case of Frunzaverdeâs Democrat Party for its membership in the European Popular Party. If Alenia fails to appeal the decision in court, then the bidding will start all over again. There are reasons now to wait for an internal investigation inside the Ministry of Defense, to get to the names which tried to distort the bidding for personal gain. Weâll be backâ¦
Translated by ANCA PADURARU
×
Subiecte în articol: english bidding