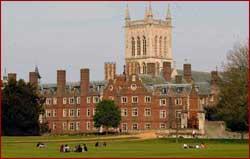 They thought it was eccentric to apply for Cambridge and, now, one can see them walking naturally on the streets of the British village to the research labs. Forty Romanian young men that really ran up against science have separate opinions about Romania. Almost half of them would come back into the country, the other half hesitate thinking about this.

In Cambridge, the University village near London, one can easily find Romanian students, because they are almost forty. They are studying at different colleges, but they all gather around in pubs and discuss about the political instability in the country or about their day by day lives. Before leaving Romania, they saw Cambridge as a hard to reach target, but, here, they realized that being a student at Cambridge is very natural. It is not an eccentric thing to wish to study at the prestigious British University. It only takes a few minutes to find out a lot of legends about Cambridge. The Romanians we met told us a few. We found out about the Sighs' Bridge which is told to have accompanied the students to their exams, about the Mathematicians' Bridge which is told to have been built by a group of scientists without using any nails, which determined them to disassembly it to find out the formula, but they didn't succeed. We also found out about the richest college in Cambridge, Trinity College, which is told to be the third British financial institution, after the Quinn and the Church. We also found out about the rivalry with Oxford which takes place on the Thames every year, competition which Cambridge won this year.

"ONE'S THIRD EYE OPENS HERE". Mircea Iliescu studies at Pembroke College, founded in 1347, and he believes he was lucky to get here. He studied Biology for two years in Bucharest, and, after that, he got a scholarship at Edinburgh were he worked with the person holding the license for the vaccine against the B-type hepatitis and got a special degree in molecular biology. "I learned the true meaning of science at Edinburgh. It was kind of hard because the curricular activities are very different, there is much more practical work", Mircea says. "The professor I used to work with collaborated with Darwin Trust and they convinced me to take my PhD, they also gave me the money for it, and this is how I got to apply for a lab in Cambridge". At present, Mircea studies the embryonic cells in a more complex project that targets the obtaining of remedies for sclerosis. He is not convinced that research totally fits him, but he thinks it is alright for the moment. "I hear my friends complaining about Romania, but I like it in the country and I want to go back there. It surely seems that your third eye opens here, you get in touch with famous scientists, and I don't know whether I will ever get to have nothing at all to do with Cambridge, but I wish to initiate a research institute in our country with people brought from Cambridge". Mircea believes that Englishmen are totally ignorant as far as we are concerned. "I have colleagues that ask me about Carol and Lupescu, about Latin... so they know something about us", Mircea adds. "We, Romanians, think we are the best, but one can easily see that, here, there are a lot more people better than you. I like that, here, I learned that I shouldn't count on appearances and I also like Cambridge because it smells like Cismigiu in the spring time", Mircea concludes.

"I AM A LITTLE BIT BRITISH". Andrei Mihaila came to Cambridge in 1999 for his PhD. He had graduated from Electronics and Telecommunications at the Politehnica University in Bucharest and wanted to try his luck when he applied for this position, even though he hardly knew everything about Cambridge. "I was taken by surprise when I got here, it wasn't easy at all because, in 1999, things were a little bit different than now, starting with mobile telephony and finishing with the frequency of the flights and finding a job", Andrei says. "My friends tell me I am a little bit British, probably referring to my arrogance...I don't know... I tried to adapt to a civilization that suited me better than the one in Romania", Andrei adds. After finishing his studies, he got a job at a company in Cambridge. They say Cambridge is second, after Silicon Valley, when it comes to spin off companies. The spin off companies are companies that result from certain research projects of the students. "I am a simple tourist in Romania, I visit my folks, but I find that Bucharest is too aggressive. I like Cambridge, it is very quiet, one can mind his own business. I like it very much in here, I am not saying I will never get back into the country, but I am not thinking about it too much". "I AM BETTER THAN AT HOME". Alexandra Nica is from Braila, she graduated from the Bioinformatics Faculty in Germany and applied for her PhD at several Universities in UK and USA. She chose Cambridge in the end, where she studies in a human genetics institute. This institute is outside Cambridge and he has to commute every day. "Here, everything is natural, everything happens as it should and I believe that this is why I feel better here. This is why I wouldn't get back to Romania...I have been financially independent ever since I was 18. The financing for my current project is 16,000 pounds per year, so I can't see any reason for which to leave", Alexandra says. "I like the English because they are aristocrats". "I WILL DO THE SAME THING IN THE COUNTRY". Mihai Brezeanu is making his final steps towards his PhD. He also graduated from the Politehnica University in Bucharest and now he studies microelectronics in a sensor lab in Cambridge. His wife, Laura, studied Law at Cambridge and, afterwards, she got back into the country, where she got a job for the Ministry of Justice. Mihai hopes to be back in the country in a few weeks, and he has already received a job offer: "I am very lucky to have found something very similar in Romania for an important sum of money. I like the British for their natural reactions...just think about the 2006 terrorist attacks", Mihai comments.
Translated by SORIN BALAN
×
Subiecte în articol: cambridge that they here with like country have this which english