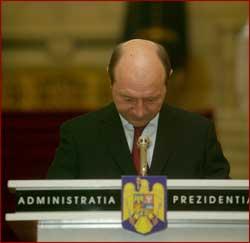 After approximately one month from the start of the procedures for the suspension of President Traian Basescu, SDP made the first step yesterday when they filed the suspension proposition at the Parliament. The SDP members ignored the PMâs appeal for a delay.

25 pages and 27 charges huddled together in six chapters. This is the SDP (the Social Democratic Party) document regarding the suspension of President Basescu. The document is made by a team of attorneys of the party, has also been consulted by GRP (the Great Romania Party) and CP (the Conservatory Party) and was approved by the SDP leading board yesterday. This is a much more consistent text than the one in 1994 against Ion Iliescu, which only had two and a half pages and 6 charges. The document signed by 182 Parliament members from SDP and GRP is no more than an enumeration of facts against the Romanian Constitution that took place during the two years since the last presidential elections. All kind of press statements, interventions at different reunions, decisions and actions of the "player, drinker and dancer", as Mircea Geoana called Traian Basescu yesterday, are present in this document. "The Traian Basescu political project is one regarding a dictatorial Basescu, who permanently denigrates the walls of democracy, the political parties, the Parliament, the justice, the civil society, and all of these seem to prepare the ground for a well-planned coup dâetat. Traian Basescu targets the instauration of a populist authoritarian regime in his own image", Geoana said. FACTS. Some of the 27 constitutional illegalities enumerated in the incriminating document are the arrogation of the quality of "player-President", "the embezzlement of the electorateâs whish" during the 2004 elections, the blocking of the Parliament after trying to revoke the presidents of the two Chambers, asking PM Calin Popescu Tariceanu to resign and trying to start the procedures for the before-term elections, and trying to substitute the Government. In the same time, Basescu is accused of having protected the highbinder interests (the ALRO intervention), of having used the secret services to "supervise the politicians", and keeping the Petromidia memo "either to blackmail the disobedient PM, either to compromise him". THE PATH OF THE INTIMATION. After filing the suspension proposition, the Permanent Bureaus of the two Chambers will inform the Romanian President. Afterwards, a common session will be called to present the suspension proposition and to listen to the Presidentâs explanations, where the Parliament will vote if the data is enough to call the Constitutional Court or to start an investigation. In case they decide the data is enough, the suspension is immediately sent to the Constitutional Court. 24 hours after receiving the letter of advice the Parliamentary will give their votes regarding the suspension proposition. DP IS AGAINST IT. The Democrats have approached the Constitutional Court yesterday regarding the new form of the referendum law. 19 deputies from LDP (the Liberal Democrat Party), one representative of the minorities (Aurel Vainer) and an independent deputy signed together with the DP deputies. Three arguments come to prove the breaking of the Constitution caused by this law, they say. The first one refers to the limitation of the peopleâs option of expressing their wishes through a referendum, by interdicting for it to be organized in the same time with the elections,6 months before or 45 days after them. The second argument regards the number of votes necessary for the Presidentâs suspension. According to Emil Boc, once elected, the President becomes the President of all Romanians, so he can only be suspended after half of the people on the electoral lists vote for it. The third argument regards the principle of non-retroactivity of the law. The DP leader explained yesterday that the Parliament should be dismissed if the referendum fails, because, otherwise, "it would get in an open conflict with the President reconfirmed by the electorate".
Translated by SORIN BALAN
×
Subiecte în articol: basescu english suspension