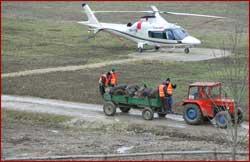 Romanian businessman Ion Tiriac organized a boarsâ hunting party on the 600 hectares of forest land he took on lease at Balc, some 80 kilometers away from Oradea city, in north-eastern Romania.