Click Accept pentru a primi notificări cu cele mai importante știri! Nu, multumesc Accept
Jurnalul.ro › Vechiul site › Old site › English Version › The Two Workers Might Have Been On a Mission to Get Themselves Arrested In Iraq 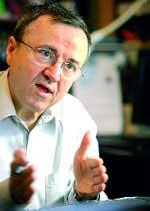 The recent incident, with the two Romanian workers arrested by the US military in Iraq on allegations of spying, is a carbon-copy case for the incident two years ago, when three Romanian journalists were kidnapped in the same country. The mastermind behind both events was the presidential office of Traian Basescu.

Like not so very resourceful American screenwriters, who always go on to make less successful sequels of a mildly successful movie, this last doctored incident was less well performed than the first one. The first thing making the two situations look-alike is the way both the journalists and the workers behaved upon their return home, in front of the media.
The two workers, who spent three months in prison, at the hands of the Americans, for taking photos inside the military base they were working in, should have felt free to make whatever statements they wanted. And yet, in their case, as in the one of the journalists kidnapped in Iraq two years ago, authorities could not help but coach them into what to speak and how. Even so, the two men gave away a few pieces of information which contradict the official version sold to the public. The story goes like this: two Romanian citizens, on a contract with an American base in Iraq, decided after several months of stay to take photos, not inside their own base, where civilians and military often did that, but in a strictly forbidden area. When stopped by the military patrolling the area, they first denied any wrongdoing, and then hid their camera. When searched and found with the incriminating material upon them, they were clear candidates for a thorough investigation and search of their rooms. This search showed they had on their laptop downloads of movies showing the atrocities in Iraq, and email addresses for people outside the military base. Clear signs of the links the two Romanians had with the insurgents surfaced, and they were moved in a detention center for terrorism suspects. From now on, things turn stranger still.
It is obvious that had they been just stupid people filming for personal use things they were told not to, then they would have been released in no time. However, this did not happen, though once the US intelligence services new about the arrest of the two Romanians it is legitimate to assume that Romaniaâs intelligence services were informed too, as Basescu himself was, on 13 November 2006. On November 26, almost one month since their arrest, the two Romanian workers received the visit of Romaniaâs consul in Iraq.
And yet, they asked the latter to not inform their families and the media back home, concerned about the consequences incurred on "their public image." Why? What was so despicable in their behavior to shame them? They were not charged with rape or armed robbery, but with taking the picture of the military commander for the base they were working in. Is it so unconceivable to assume that the two men did their best to find themselves arrested and sent to prison along terrorism suspects?
Is it so unrealistic to assume that they got scared when the consul came to visit them?
After all, the consul may have belonged to a different Romanian intelligence service than they did, and break open their cover. Is this too far fetched? It may be so.
But why, then, the US military did not allow the Romanian consul further meetings with the two men, after that first encounter, and their case was taken over by the Romanian military in Iraq?
Translated by ANCA PADURARU
×
Subiecte în articol: romania they with english were their iraq military