“A hundred years of Rotary” 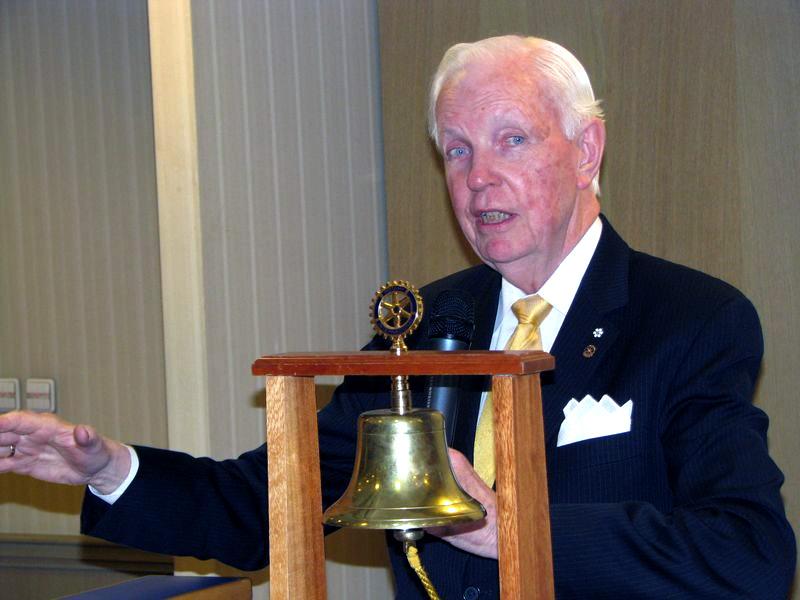 Rotary is a worldwide entity of more than 1.2 million business, professional, and community leaders. Some of them were or are great personalities in politics, diplomacy, business or culture like US president Jimmy Carter, the writer Thomas Mann, the poet James Whitcomb Riley or the arctic explorer Richard E. Byrd. Romania has always been a “hot point” on Rotary’s map. The first club was established in 1929 in Bucharest. For the first time in Romania, the Rotary International president, the Canadian Wilfrid Wilkinsons offered us an interview.

Rotary is a worldwide entity of more than 1.2 million business, professional, and community leaders. Some of them were or are great personalities in politics, diplomacy, business or culture like US president Jimmy Carter, the writer Thomas Mann, the poet James Whitcomb Riley or the arctic explorer Richard E. Byrd. Romania has always been a “hot point” on Rotary’s map. The first club was established in 1929 in Bucharest. For the first time in Romania, the Rotary International president, the Canadian Wilfrid Wilkinsons offered us an interview.


Wilfrid Wilkinsons: Rotary Club is an organisation that was started in 1905, so it is 103 years old now. Originally was started in Chicago, in United States. By 1910 had spread to Canada and soon after it spread all around the world. The first club in this country, right here in Bucharest, was in 1929. Of course, during some periods, like the Second World War, the Communist regime it stopped. It never really run away but there weren’t meetings on a regular basis. But certainly in 1992 was revived. And we were very pleased that the Bucharest was the leader on that. Today Rotary is in 170 countries around the world. It has over 1,200.000. And that’s just a number because we also have Rotaract, which is for young business people and university students and has probably 160.000 around the world. In the Interact program for high schools there are probably 200.000 people. Our main objective is achieving peace in the world.


No. The initial purpose was for the business people to come together and have fellowship and exchange business. But then they decided they should do something for the community and gradually they became a service club as opposed to a fellowship club. And they looked up at their community and thought what the community’s needs are. And because it was made up by the leading business people and the leading people from the professions and now the leading people from the community organisations they were able to know what those needs are decide were they can help on those needs. And so, gradually it became more and more international. And when Rotary was confronted with two World Wars, they have realised that what they should be doing is working for peace. And from that point, working for peace became one of our main objectives. We are doing that with our Ambassadorial scholarship. We have sent more than 35.000 people to go study in another country at the university level since 1947 and we spent 20 million dollars at least a year in these programmes. We have a new programme: peace and conflict resolution fellow. That’s for people in positions with NGO’s or governments who can go to universities and do a master degree in peace and in conflict resolutions. And we hope that when they will come back in the future, they will have a better idea  how to solve the differences between countries in a peaceful manner rather then in a war like manner. But in addition to that, of course, we have an exchange programme where we take young business people and we sent them to another country to live with Rotarians for six week that are in the same profession: teachers with teachers, doctors with doctors, policemen with policemen so they learn in another country what they are doing. Because we consider that communication between people is the basis for creating peace. So, that’s the main task: to do something for the community. That is now developed into a great area of polio eradication where we said that we want to do something for our hundred anniversaries.


We have decided in 1988 that we are going to eradicate polio. Therefore we formed a partnership with the World Health Organisation (WHO), with the UNICEF, with the Centre for Disease Control and all the governments in the world, basically. In the first year when it started there were a 1000 polio cases everyday. Last year there were just over a 1000 cases all over the world. It is taken longer than we thought and we still have a little way to go but we are hoping that very soon we will have the last case of polio and we will achieve that objective. That was one of tasks when I think the governments of the world have helped, they have been big founders. Rotary members have contributed USD 650 millions but the programme costed USD 5 billions. It has been a very expansive programme but the savings are tremendous, the savings from not having physically handicapped children to look after, savings we have in pain and suffering of those children.


We think the international organisations have done everything, they are our main partners. As concerns some governments we are a little bit disappointed right now, that the G8 countries are not leaving up to the commitments that they made. Including my own country Canada which was very generous. The only two countries right now leaving up to the commitments they have made at the G8 meeting in Gleneagles were the United States and Germany. We think that very soon there are going to be other announcements. I hope that my country will finally commit. For years they did commit but like in any country after some years you have a change of government, of ideas, of direction. And that’s why we need to get this job over quickly. And that’s why we were so fortunate when in 16th November the Bill and Melinda Gates Foundation sent in our account USD 100 millions. We didn’t have any agreement but they simply said “we are giving you USD 100 millions if you raise another USD 100 millions.” And that will make USD 850 millions that Rotary will put into this campaign. Which is a lot from a 1 200 000 members and in addition to all other programmes. And it was also significant because it indicated that an outside organisation, a free enterprise organisation was satisfied with what Rotary was doing and it was a real vote of confidence.


The agricultural crisis which, in a way, recently blossomed is really government made and I think governments will have to solve that problem. What we can do is to work with water projects, because many parts of the world do not have good water. If you have good water, then you have people with a better health, who can work, they can farm. They can also send their children to school to learn to read and write and solve their own problems. And that’s a long range goal.


It’s almost impossible to make a profile, because they are of all ages, races, religions. What they need to do is to share the core values. We want to bring together people who share the core values of Rotary. The first value is service. Either Rotary club does service for the community, either local community or world wide community. Second that they enjoy fellowship because we believe that when people come together and meet on a regular basis they get to know each other they will be friends and what the communities need. But also we need to have diversity which is the third core value. The fourth core value is integrity. A good Rotary club helps improve the integrity of business and professional community, to encourage their members to act in good faith. And the final is, of course, leadership. We provide a very good leadership. We train our members and it’s great for small businessmen who perhaps don’t have this opportunity to learn how to run a Rotary club, a Rotary district. So, I think that with that kind of appeal, people should come to us. Especially women.


Not as many as we’d like. Because up until 1967 we didn’t have women at all. Women were not in business back in 1905. But now women are in the very top of business, they are the head of countries, of big corporations, some of the Fortune 500 is women. So, naturally Rotary should have a lot more women. Right now they are 18% percent 1.200.000 our members. In US is closely to 23%, in other parts of the world were women are not so involved in the business they are fewer. Starting July 1, we will have the first woman member on the Board of Directors. Cause, Rotary is run by a Board of Directors. She’s a doctor from Paris, she also runs a dialyse clinique and she’s also in the City Council.


Next year your district governor will be a woman and I think about one third of the members that I met are women. Of all members I think only 15% are women but things are working better.


I’m really quite amazed. It was a big decision for the Board of Directors to decide to make this a separate district with Moldavian. Because usually we say that in order to have a district you have to have about 24.000 members and at least 60 clubs in that. Because Rotary gets its money from the dues the members pay and so every time you have a district it costs more money, for district governor…not that you pay any salary but just for the travelling, we bring them to San Diego for training, we sent them to Convention. But Romania has blossomed more than any other country. They have now 89 clubs.


They have to decide on what’s best for their communities. Only being here for two days, it’s hard to see all the projects. But they have presented me some of them. For example, they have signed an agreement with the National Drug Agency to work on a very important problem and I really think its great step forward.

×
Subiecte în articol: that they with country have this english people from world business will club were more members rotary what think very women because community district organisation